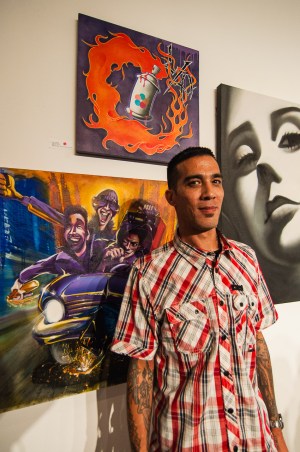 Mike Pyro, more commonly known as “Pyro”…
Original member of the “West Coast Artists” Crew, has been an integral part of the Los Angeles Street Art Scene since the early 1980’s.
Known for clean lines and expert letter manipulation, Mike completed his tattoo apprenticeship in 1997 and has worked alongside many legends in the tattoo industry.
In addition to being a script & lettering master, Mike brings his influences of graffiti, gang lettering, traditional tattoo, and elegant typography into his designs resulting in a unique approach to his tattooing.

As well as having designed many logos for well known bands and clothing labels, Mike has been featured in numerous periodicals, both national and international. Mike has just been featured in the book “Skin-Graf, Masters of Graffiti Tattoo” and just recently inducted into the Getty Museum Permanent Collection.